When someone says, “I’m going to go to the gym 3 times next week” or, “this year, I’m going to eat more whole foods,” or, “from now on, I’m going to walk more and drive less,” what they’re really doing is sharing their intentions with you.

These are the things they intend to do: changes to their existing routines or behaviors that they want to make.

And in an ideal world, they would be successful in making those changes and their intentions would guide their future behavior. They’d hit the gym 3 times, clean up their diet, and leave the car at home more often. But unfortunately, intentions don’t often become reality, and there are a few reasons why.

First and foremost, is the fact that intentions are often in direct conflict with our pre-existing habits, and old habits die hard. Particularly when they’re what psychologists call “strong habits”

Strong habits are behaviors that we perform extremely often, like grabbing a muffin on our way to work, browsing on our phones before bed, or hopping in the car each time we want to go to the grocery store. They’re often daily, if not more frequent, and thanks to how often we do them they’ve become deeply ingrained in our brains.

If you think back to the concept of automaticity, this means, even if we want to make a change, we’re fighting against our brain’s go-to responses and decisions. Though we might intend to do differently, we can find ourselves with a muffin in our mouths, our phones in our hands, or our feet on the gas pedal before we even realize what we’re doing. 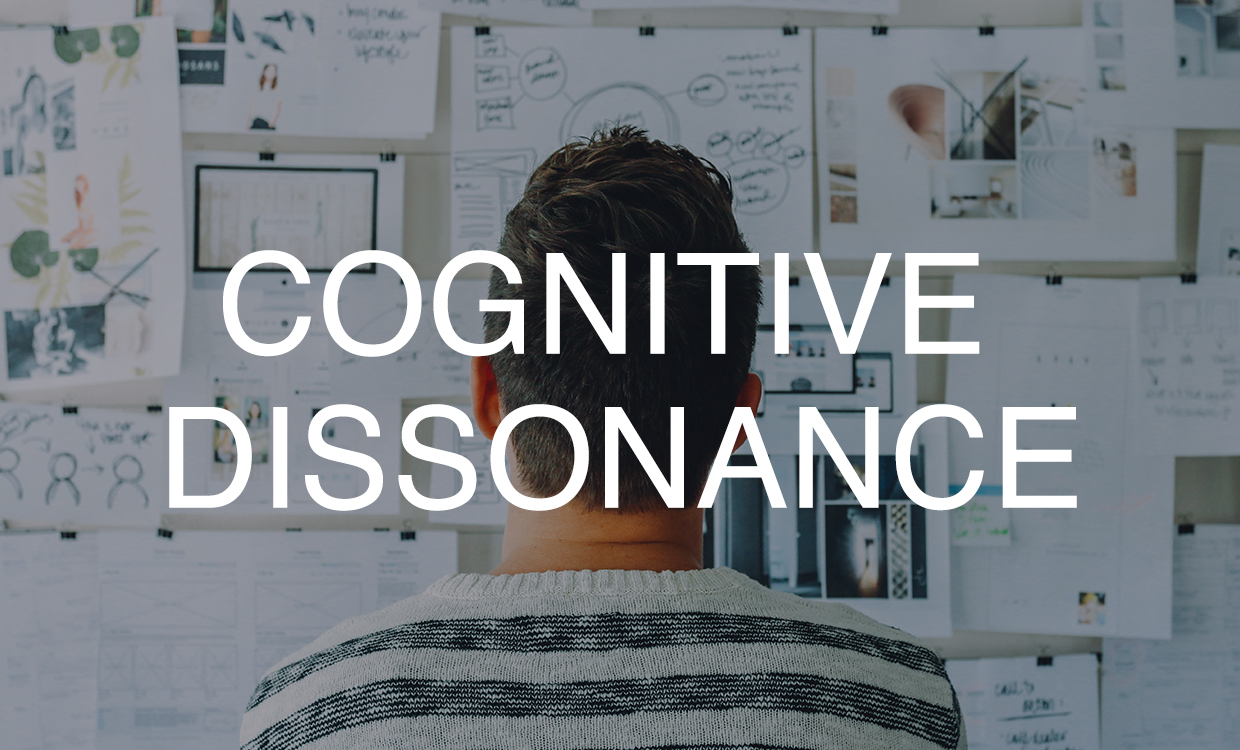 This might already sound a little depressing, but before it gets better, it gets a little worse.

Not only is it difficult for our intentions to overrule our habits, it’s actually common for people to change their intentions or even their larger goals when they aren’t successful in thwarting a pre-existing habit.

Why does this happen? There are a few possible explanations, but one of them is rooted in what’s known as cognitive dissonance theory.

Originally put forward by the psychologist, Leon Festinger, the theory proposes that humans are naturally inclined to have our thoughts, attitudes, and beliefs align with our behaviors and actions. When they don’t align, they create what’s known as “cognitive dissonance”—a state of mental discomfort.

Festinger suggested that there are three ways for individuals to remedy this dissonance:

As you can see, none of these solutions bode particularly well for changing habits or helping people stick to their intentions. The most likely scenario when someone is struggling to modify a behavior is that they’ll change their thoughts or beliefs to make that “failure” more acceptable.

Someone who fails to meet their intention of going to the gym 3 times a week might alter their thoughts so that they genuinely believe they only meant to go that one time they made it there. Or they might read a (bogus or unfounded) article that says only 30 minutes of activity is needed per week and use that to justify their lackluster performance. They might even tell themselves that when they said “next week” they really meant “next, next week”.

Unfortunately, cognitive dissonance isn’t the only potential pitfall preventing individuals from sticking to their intentions and forming new habits. Self-fulfilling prophecies might also be at play.

We aren’t talking about prophecies in the Nostradamus kind of sense, but rather the smaller more personal predictions we make about the outcome of a specific project or course of action. The self-fulfilling part comes from when we act like those predictions (or prophecies) are already true, and, in effect, cause them to be true.

To better understand how self-fulfilling prophecies work, consider the example of a personal training client whose trainer has prescribed them a workout regimen and nutrition plan to help them achieve their weight-loss goals. Despite engaging the support of a fitness professional, this client, having already failed multiple times to shed a few pounds on their own, is skeptical about their ability to lose weight.

Thanks to their gloomy outlook, the client is likely to view all setbacks or lack of immediate progress as proof of their imminent failure. They’ll start bending the “rules” of their training program more often, making achieving their goal even more difficult and reinforcing their prediction of failure until, at last, they decide to give up. The client will have biased their actions until the prophecy of failure eventually came true.

In the next installment, we’ll be looking into the leading research-backed techniques for both making and breaking habits.

Habit and Intention in Everyday Life: The Multiple Processes by Which Past Behavior Predicts Future Behavior by Judith A. Ouellette and Wendy Wood
Habit vs. Intention in the Prediction of Future Behaviour: The Role of Frequency, Context Stability and Mental Accessibility of Past Behaviour by U.N. Danner, H. Aarts, and N.K. de Vries
Purchase and Consumption Habits: Not Necessarily What You Intend by F. Ji Mindy and Wendy Wood
Cognitive Dissonance as explained by Simply Psychology
Self-fulfilling Prophecies as explained by Psychology Today

How to Motivate Your Online Training Clients Keep your clients coming back for more–each session, each season, and each year. Here are few interesting ways to get your clients…
How to Train Your Clients Online with the Trainerize App Part of what intimidates you about delivering online training is learning a new software, right? Well, we’ve taken the guess work out…
How to Retain Your Personal Training Clients If it takes ten times more investment to get a new client than to keep an existing one, you’re going to want…